Two posts in two days! Luck you! Throwing it all the way back to India again! Sorry I’ve been so lame with posts but I’ll try to catch you up as fast as I can!

Another city, (blue this time) and another castle called Mehrangarh Fort. I’m starting to sense a recurring pattern here… I feel like forts in India are a bit like temples in Thailand, there’s one in every city and each one is not to be missed. To be fair, every fort we have seen in India has been pretty amazing. I won’t lie to you, I had a little bit of a wobble here. After waiting my turn to get my bag checked before entering the fort, an Indian man decided to shove me aside and push in front of me. REALLY?! I really did not appreciate the sexism in India. I’m pretty sure my anger showed  as no one else tried to push me again.

As we continued to walk towards the fort I realised something else was distressing me. I did not have a clue as to why I was so grumpy, but I was and someone was going to receive my wrath.

We soon reached the first gateway and I snapped at Charlie that I had to sit down. It was then that I realised my hair was down and sweat had plastered it all over my face and neck, no wonder I was cranky. I KNOW that all you girls with long hair can empathise! Unfortunately for Charlie it was him I took my bad mood out on, and once again, I’m really sorry!  After scraping it back into a messy bun held in place by a pen, a weight (literally) lifted off my shoulders and we proceeded to tour the fort. 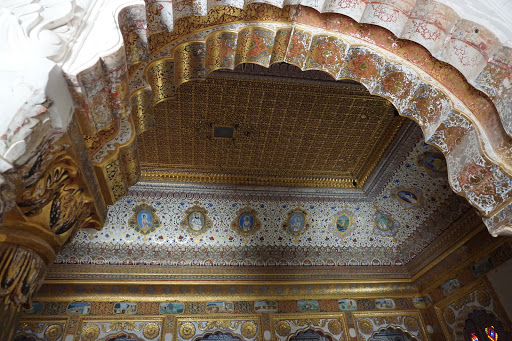 Anyway, I am completely hopeless when it comes to history (unless it’s to do with literature) but I have learnt more in the past week I have spent in India than I did in the entire nine years I spent studying history as a compulsory subject at school. 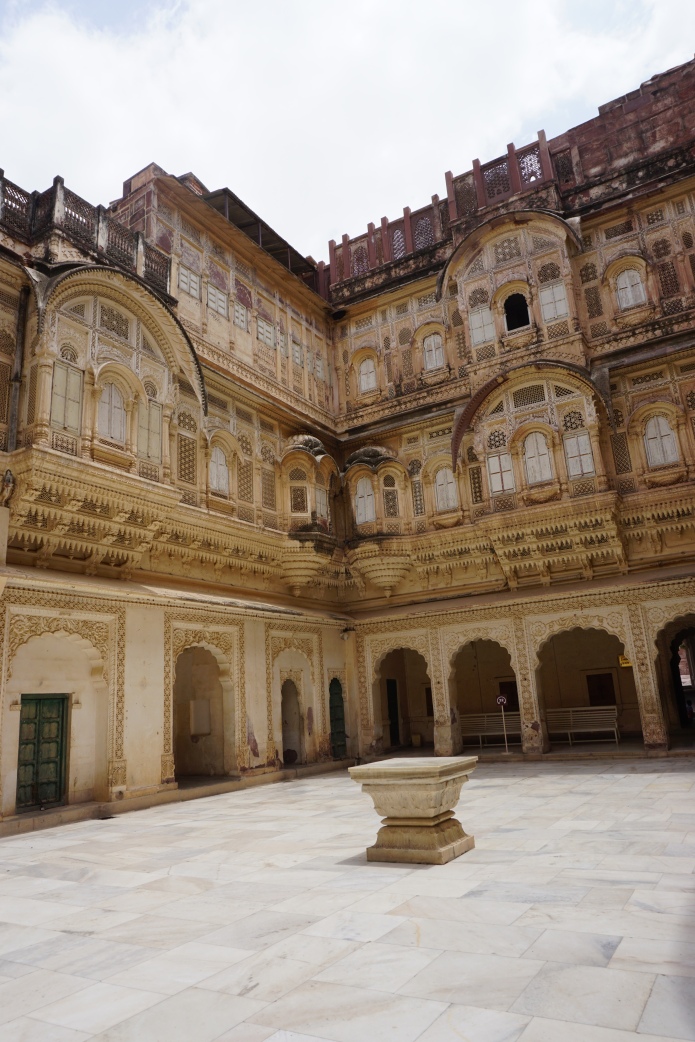 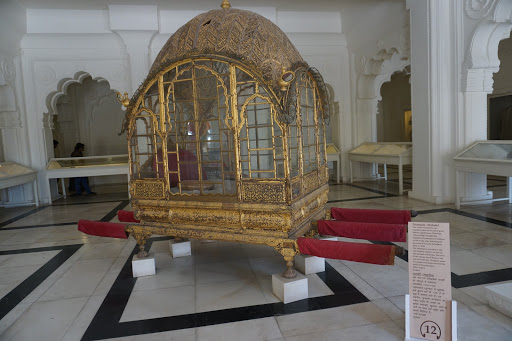 Charlie and I trekked up an unbelievably steep hill where we were greeted by a view over the blue city, most definitely a sight for sore eyes after enduring that killer walk.  Apparently rich members of the city painted their houses to blue to distinguish themselves from the poor. Unfortunately for them, anyone can buy a can of blue paint and paint their house so this didn’t segregate them for very long. 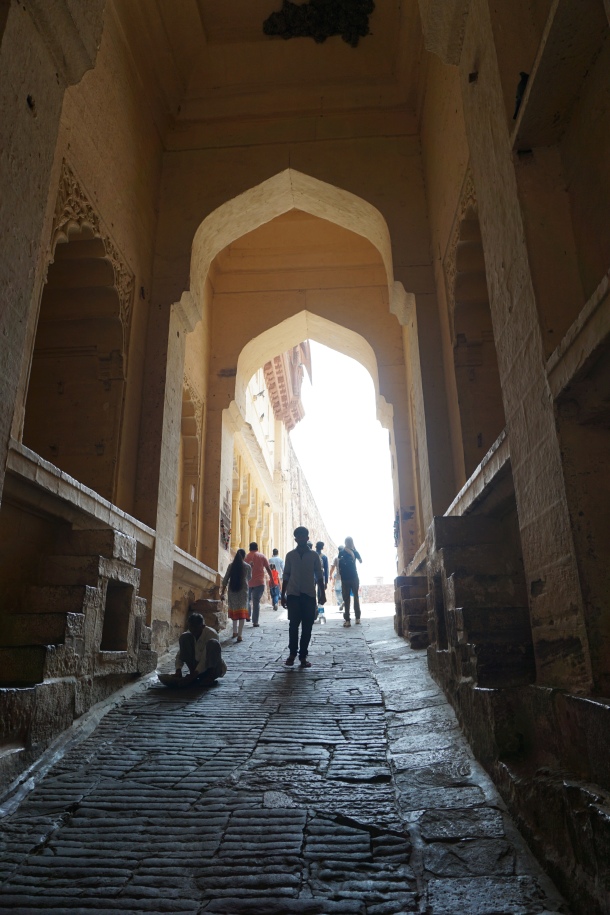 The Mehrangarh Fort has seven gateways, each for different occasions and triumphs but there was one gate that struck me in particular.

The last gateway we walked through had dozens of hand prints next to it. We listened to our audio guides and it explained that the hand prints belonged to the ranis who were married to Maharaja Man Singh. When Maharaja Man Singh died in 1843, the women had to walk onto his funeral pire without making a single noise until they burned to death. This would then enjoin husband and wife eternally. This definitely brought back vague memories of year 9 history but seeing the handprints has made me incapable of forgetting what women had to endure.

After more wandering around castles and courtyards, learning more about India’s incredible history it was time to head into the city centre of the second largest city in Rajasthan.

One word for you.

It was the end of Ramadan and the beginning of the celebrations of Eid, so of course it was going to be hectic.

We drove past the clock tower and through the absolutely rammed market place. To be completely honest, I’m surprised the car made it through unscathed AND without running anyone over.

After we ploughed our way through the city centre, we made it to our hotel, The Krishna Heritage Haveli. Bit of a mouthful hey?! But what an amazing hotel. By far one of the best hotels Charlie and I stayed in. Like our hotel in Madawa, it was completely covered in mosaic with an incredible view of the fort. Watching the sky turn purple with dozens of children kite running has to be one of the highlights of Jodhpur. 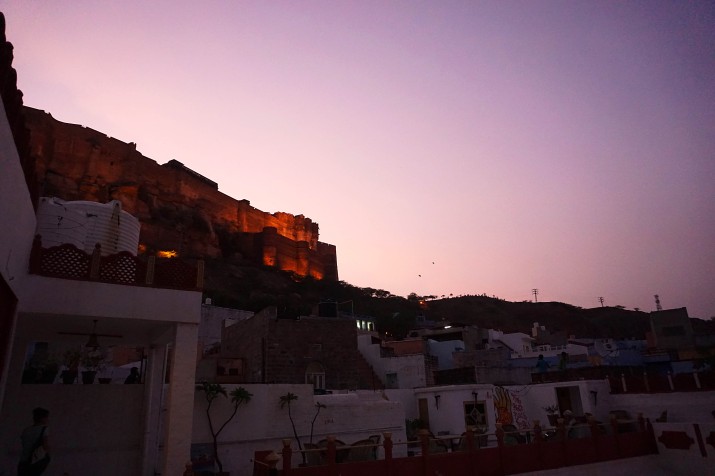 As well as being known as the blue city, Jodhpur is also reknowned as the sun city because of its unbelievable and constant humidity. I won’t lie to you Charlie and I did spend a fair amount of time by the pool trying to stay cool. But hey! It’s no crime to have a couple of chill days right?! 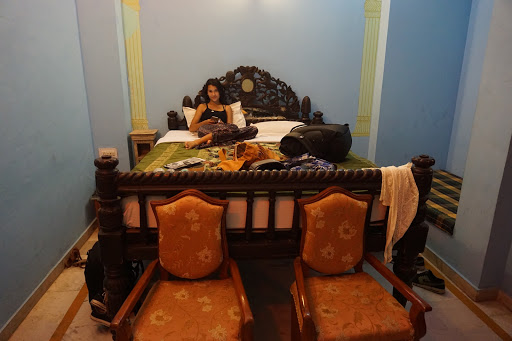